My morning had not started the best with my alarm failing to get me up in time for my five am work out. Because of that I left about five minutes early for work. My thirty-minute commute is usually pretty non-eventful, but not today. 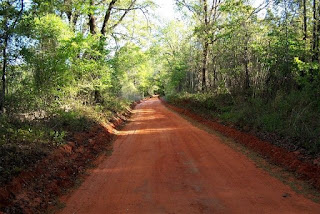 As I rolled into the thriving metropolis of Whitesburg, I saw that there was a problem that extended beyond the usual elementary school back up; we were all sitting still. Suspecting there must have been an accident, I and about five fellow commuters were growing weary of our stagnant state.

We were all thinking that we should take a side road and detour around the problem. We should be able to take a left turn, then take a right, drive down a bit, then take another right, and be on our way. It should work.

After a few minutes more, a train of impatient drivers took a left turn. I was on the phone with my mother, hands-free of course (that is a story for another day), and she, being a Whitesburg native, said, “I don’t think you ought to turn there. I think it turns into a dirt road.”

Instead of taking her advice and turning around I decided to follow the crowd. I told her, “I’m sure they have paved the roads since you were young and besides all of these people must know what they are doing.”

A couple of minutes after we ended our call the paved road turned into gravel as promised. Staying optimistic I thought, ‘Gravel is not that bad, and I’m sure we will be back on the main road in a minute.’

The white powder from the gravel road was coating my damp from the morning dew car. Soon I felt that we were going the wrong direction entirely. The road was veering left. Soon after that I saw another warning sign that I should have heeded. No Through Traffic.

The white dust quickly transformed to a cloud of red clay particles from a freshly-scraped road parting two clear-cut logging fields with not another sign of civilization in sight. The road was only wide enough for one car, so turning around wasn’t an option. Our train of five cars was regretfully committed to our erroneous path. The red dirt now covered my windshield impairing my vision. I could only imagine what the rest of my car looked like, and we were no where near the real road. As I hit the windshield-washer a red mud tear ran down the car in front of my eyes- I think my car was sad about my choice.

I turned on google maps to see if we were on a real road that would eventually lead to anywhere. The road widened a bit and one of our members of the train decided to turn back. Blindly following the leader is what got us in this mess, and I understood the regret that driver felt, but we had gone too far. Sometimes you can go so far down a wrong path that turning back is not the best answer- instead you just have to press through another way.

After another five minutes of eating the dust, we began to see signs of civilization. There was a farm house and around the curve there were three teens waiting on the corner of the dirt road for a school bus. They all, including their yellow lab, looked at our unit with wondering eyes. It was not often that four cars filed down this back-road one right after the other.

Finally, we turned right and hit the pavement again! As we crossed the railroad tracks, I knew where we were- just across from my aunt’s house.

My impatience had caused me to be late, plus my car was embarrassingly dirty. I don’t know that I will follow the leader so easily in the future, and maybe
my mother had been right. Shhhh, don’t tell her because I will never hear the end of it! Patience really is a virtue.