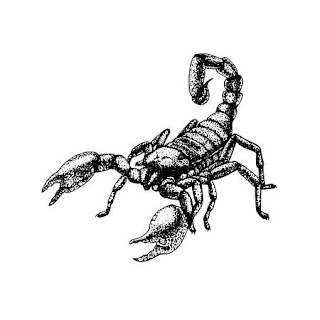 Everyone has experienced that feeling of something crawling on you while you are sleeping and usually it is just that- a feeling. Early Sunday morning, about 5:30, I had flipped over for about the thousandth time to sleep on my stomach with my hands above my head. I felt something on my forearm and was startled to feel something real as I flicked it off with my other hand. I hopped out of the bed and turned on the lamp to scream in terror at what I saw, waking Dave up.

Dave asked, “What is it?” To which I screamed, “It is a scorpion! It is right there, and it was crawling on my arm!”

Being the hero he scooped the horrible creature into his hand and washed him down the sink. Thinking I would be fine. I was far from fine!

I was in full-fledged panic mode. I got the flash light and looked under the bed and every piece of furniture for more of the nasty monster’s friends. I ripped the covers off the bed searching every inch for critters, telling Dave what made things worse was that we had washed the sheets and blanket earlier that day. I then continued my rant saying that it was bad enough to find another scorpion in the master bath a couple of days before, so we must have a nest of them living somewhere in the house.
I climbed on the bed to shine my flashlight into the air duct directly over where I sleep, thinking they must be up there- that’s how he dropped on me. I found no evidence. In fact, I found no evidence anywhere, which was more troubling.

Dave kept telling me to come back to bed as I moved my search to looking at the fuzzy dogs. They must be hitching a ride in the house on the furry creatures as they go outside to potty.  Dave said, “It is okay. There was only that one.” To which I said, “Are you sure you washed him down the drain?”
I walked into the bathroom to see the nasty scorpion, tail in the air ready to sting, rising up from his watery grave. I screamed again.

I got a pair of scissors and vowed revenge. I cut him into three pieces and told him, “Try to come back from that!” After a thorough search of the bathroom, I decided to try and go back to sleep.

Lying in bed, every inch of my body felt like creatures were crawling on it. I thought about how long he might have been crawling on me. The back of my leg started to feel like maybe it had been stung and itched. I wondered if I would ever be able to sleep in my bed again without being creeped-out.

Finally, the sun came up, and I decided to start cleaning. Hours later, I had cleaned the whole downstairs and fumigated the whole house, especially the bedroom. Normally, I am very concerned with toxins, but fear of scary creatures wins over fear of future disease.

That night, even with the fumigation and cleaning, I made a precise inspection of my bedding and the bedroom before attempting sleep. I think I have added another thing to my evening rituals- a scorpion search. And you can bet that the next time I think I feel something crawling on me the light will be immediately turned on, maybe I need to get one of those clappers so that it will be easier to activate.