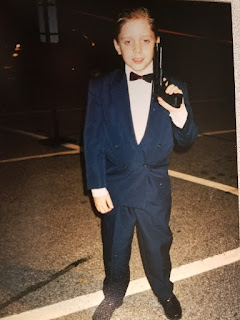 As I am greeted by a small Super Mario and a wee witch riding a broom, I am reminded of a collage of memories of Halloweens many years past. I guess I enjoyed the creation of the costumes as much as anything. We never were the ‘go to Walmart and get the nylon suit and plastic mask’ kind of people; we tried to be a little more original than that.

There were the preschool kind of costumes with I guess my favorite, or most embarrassing for my adult child, costume was a hand-painted (by me) Superman emblem on a bright blue sweatshirt. It wasn’t the painting that made it embarrassing for him, but to create the look we needed the red Superman drawers to wear on top of the sweatpants. Being a resourceful mother, I told my four-year-old to wear a pair of red underwear on the outside. To this day if you look closely at the photos you can see the fly indicating that these super-pants were intended for a much more practical purpose.

The other thing I remember about Halloween with my kids was how much more they enjoyed it when we moved into a subdivision. We would walk with our neighbors as they approached every door collecting quite the haul of sweetness. The weather at the end of October was always unpredictable, and the year that I rented a gorilla suit for my oldest the temperatures after dark were hot enough to wear shorts. A fuzzy gorilla suit can be quite hot when walking a couple of miles.

My days of dressing a small James Bond or a budding rock star are over, but I’d like to remind those of you with little goblins to cherish the moments. This fall holiday offers you the chance to disconnect for a bit, interact over what costume to create, and then go on your candy quest. Carve a pumpkin, go on a hay ride, run through a corn maize – take a moment to forget the seriousness of life and play with your children. It won’t be long, and they will be in their thirties and you will be looking back at your collage of memories. Make sure to create a big one. 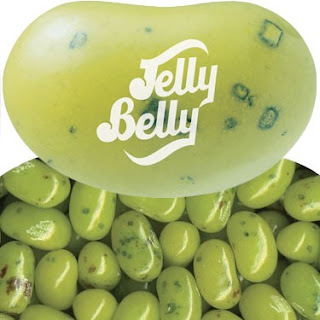 I’m sure everyone has weird little habits that make them unique. I’m also pretty sure that some have a little more uniqueness than others.

Last week I needed to get some cash and instead of going to the ATM, I decided to walk around the newly remodeled Target. Not needing anything, but knowing that a purchase of some sort is required to get cash back, I wandered to the candy aisle. I didn’t want a full-on, candy binge with chocolate, caramel, and nuts – just something small, slightly tangy, and chewy. I decided on a small bag of Jelly Belly jellybeans with its label boasting of 30 flavors.

At my desk I opened the bag and dumped a few in my hand to examine them. I am sure there are some wacky people out there that just eat a handful of them, although I’m not sure how you could mix licorice, sizzling cinnamon, and coconut together for a great taste.

So I proceeded with my method. I dumped them out a handful at a time and used the handy guide on the back of the bag to identify the ones for consumption. Out of the thirty flavors, the one that I was happiest to find was juicy pear. When the first one of those melted between my teeth I marveled at how close to a pear the little circle of sugar tasted. There were three of them. Then I methodically picked out the only other ones I could stand to eat: green apple, lemon lime, Sunkist lemon, Sunkist tangerine, and peach. I raked the rest into a pile and put them back into the bag. Who wants to eat toasted marshmallow, tuti-fruiti or bubble gum flavored jelly beans anyways? What is really bad is when you pick up a yellow one thinking it is a Sunkist lemon and it turns out to be buttered popcorn, then you are forced to find another one you can stand to get the taste out of your mouth.

After an hour of sorting, eating a few, and being randomly disappointed I came to a conclusion that I probably should have discovered much earlier in my life. If you are craving a juicy pear, don’t be too lazy to walk to Publix, use their ATM, and buy the real thing. Sugary substitutes are always a poor imitation or as Marvin Gaye and Tammi Terrell sang years ago "Ain't nothing like the real thing, baby."

Just a Taste of My Book to See If You Like It...

My first job was at Baskin-Robbins ice cream store. One of the best things they did was to have tiny, little pink spoons where you could try a flavor before committing to a whole scoop. Who doesn't like the idea of try it before you buy it? So, this post will contain the first chapter of my book Leave Him? That way you can get a taste of what the book will be like before you buy it- in Baskin-Robbins tradition.
Leave Him? (available at Amazon.com in print for $12.99 and Kindle for $2.99) Also available for local purchase in print at at Willis Jewelry Company located at 203 Adamson Square in Carrollton, Georgia, the Therapeutic Lair at 723 E. College Street in Bowdon, Georgia, on the square in downtown Newnan, Georgia in Gillyweeds at 21 W. Court Street, and at the Wildwood Charm shop at 315 S. Hamilton Street in Dalton, Georgia.