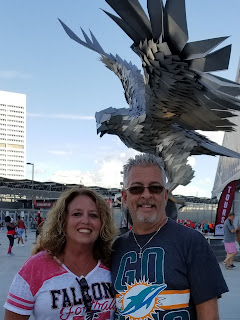 It is that time of year. You know the season. The one where countless hours are spent watching people throw perfect spirals only to be intercepted, miraculously caught, and defenses holding back the line of attack all at the cheers of the crowds. It is the time of year where for twelve hours most Saturdays my husband watches, not just his favorite teams but any team, score touchdowns. It is that season where movie watching is sacrificed, and I have to get used to competing with the other love in my husband’s life- football.

I decided to kick off this year’s football season with birthday tickets for the Atlanta Falcons verses the Miami Dolphins preseason game at the Mercedes-Benz Stadium in Atlanta. Dave grew up being a Dolphins fan, and I have always watched the Falcons, even back in the Steve Bartkowski days (he was the Atlanta quarterback in the 70’s and 80’s famous for miraculous Hail Mary passes).

Why does football season come in with such anticipation? We have some variety of sports to watch all year long, but the kick off of football season makes fans elated. Just check your social media feeds any weekend to verify. Football fans come in many different varieties. There are the ‘only college fans’ like my uncle Don, a Georgia Tech season ticket holder, and there are even variations of those fans who only follow ‘their team’ and manage to not watch for twelve hours straight every Saturday. There are also those who think of themselves more as ‘purist’ and insist on watching high school talent compete. Then there are the fans who want to watch ‘the big boys’ or professionals play saying that they take the game to a whole new level. Then there are ones like my husband who will watch them all until I scream, “I’ve got to watch something with a plot or I’m gonna die!” That rant usually happens around December when I have grown tired of playing solitaire or reading by a crackling fire while he yells instructions to the players and coaches.

For me, the beginning of football season is sort of like being pregnant with your second child. You have forgotten the bad parts and are actually looking forward to doing this again. The beginning is also a time before hopes are dashed- a time when your team could win it all, after all they have no loses.

Well, I know it was only a pre-season game, but the Falcons put on a disappointing showing against Dave’s Dolphins. I guess those tickets really were a birthday present for him. Happy football to all you fans!